Research : Movement and tonality of the void spaces – 14. June

The Anne Frank Center Berlin is a partner organisation of the Anne Frank House in Amsterdam. The center commemorates the German Jewish family’s story with the exhibition and offering various educational programs all year around.

The center is located in the Haus Schwarzenberg, where I have my studio.
On the wall of the staircase there are Anne Frank’s smiling photos posted chronologically and I used to hear the audio book on the staircase.
So over years I became feeling very familiar with the world famous author. 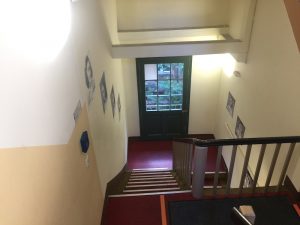 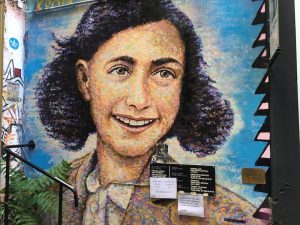 Few years ago, I got to know that Anne Frank born in the same year with the actress Audrey Hepburn, and it was the same year with my father.
Anne Frank went to the hide-out at 1942 in her age of 13 and lost her life at 15. My father born in Kyoto in September 1929, had three children and left the earth in 2007. Associate her to my father through the year they born, led me think of her life she might have had if there wasn’t ever the Holocaust.
This 12.June 2021 would be her 92th Birthday and I went to the center.

When I first heard about Anne Frank’s diary I was young, it was heartbreaking to imagine that she eventually lost her life right after her sister Margot’s death, yet it wasn’t realistic for me because her appearance  was quite different with us Asian.
Listening and reading through the photos and interviews this time however, I found myself seeing the story not from Anne’s side, but rather her parents‘ side, and I felt more sympathy because she and her family just looked as same as my friends and their family here in Berlin.

The father Otto, who lost his wife and two daughters, hoped that the diary would be universally acknowledged across times and races, rather than being treated as a war literature or story of a Jew. 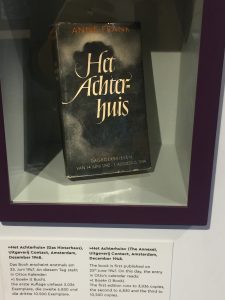 Het Achterhuis (The Annex), the original first edition published in 1947.