Diskurs Serie : Ein Objekt, Viel Fragen at Humboldt Forum
In October 13. I perform at the listening room of the Music-Ethnology at the Ethnological Museum of Berlin (German: Ethnologisches Museum Berlin) at the Humboldt Forum.
The ethnological museum has a large collection of the African, Pacific and Asian arts and besides the exhibition the museum introduce the German colonial time in Africa.

Refer to my theme of this research (the sound and movement of the void spaces), the curator of the discurs series „Ein Objekt, viele Fragen /One Object, Many Questions“ , Valerie von Stillfried gave me a further question.
The sound of emptiness, but not about the sound in a void room but of a silenced instrument in museum.

The instruments in the museum had been taken apart from its original location and the people who’d played the instruments.
Valerie and I chose an African instrument Likembe/Mbira/Kalimba (E39040 (HUF / O2.019.P3, Die Sammlung Köhler-Osbahr) at the ethnological music department.

Since my Dis Tanz Solo research started, I became more aware of the importance of experience the real objects and places, which carry the history of humankind. For me, those all original places and objects are the gateways to the history and culture I haven’t experienced, and the gateways to think of the present world.
Being a performer I have my privilege to experience other culture through the music and dance.
When I imagenaly put the music and dance on the world map, the world map start showing the interweaving history of mankind.
Music and dance can tell the things far beyond important than the borders.

⭐︎Thank you for the Photo: by Humboldt Forum. 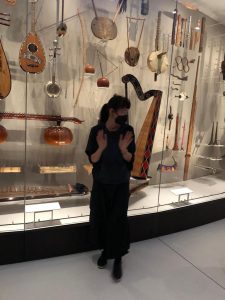 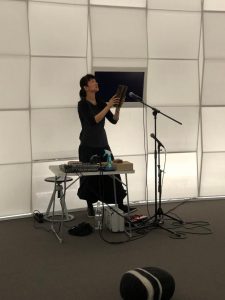