Aloha everyone! Hula Hut and the Seven Seas performs “E Mama E” in honour of International Women’s Day 2015.
The song tells of saying goodbye to mother before leaving the island for the mainland; through her tears, she vows to return.
Composition credited to Hiram Kaehu.
Mahalo to Jeff Fisher for his assistance and the Neurotitan Gallery Berlin. 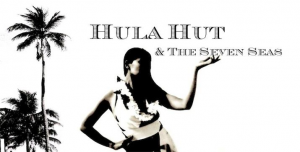 The group has been performing throughout Berlin since 2011, and consists
of Sebastian Müller (acoustic/electric steel guitar), Patrick Arp
(ukelele, acoustic guitar) and Taylor Savvy (acoustic guitar, bass).
Our most recent member Yuko Matsuyama sings and dances in the unique
ha’i style of the times.
Soundcloud https://soundcloud.com/hula-hut
Facebook www.facebook.com/hula.hut.58

As musicians, we have naturally played various other forms of music, yet have formed this project to accomodate learning the Hawaiian repertoire as fans of the music. Sebastian toured and recorded as part of Terranova and Lotterboys (club/remix/dancefloor sensations) and continues mixing musical projects for Peaches (electro queen), JC Beck (Hollywood film composer), and Jamie Lidell. Patrick has long been involved in the Berlin indie music scene, touring the globe on keyboards and guitar with Barbara Morgenstern. Taylor Savvy continues making music with Bonaparte (Swiss shock pop) and has recorded/toured with various bands including Iggy Pop, Jamie Lidell, Feist, Stereo Totale, and Gonzales. Together, we three have a confidence and respect for Hawaiian sounds, and as Berliners, enjoy the healing properties of the music as an elixir for modern city life. More sunshine, please!

Hula Hut can be currently enjoyed in 2 formats: as a centerpiece act (with video installation, story-telling segments, special guests i.e.singing and hula dancing) to compliment any party or festive occassion, or as background accompaniment to any social gathering (soothing live music with a unique sound).

Hula Hut and the Seven Seas may also be hired for event organising and theatre engagements. We enjoy collaboration, and look forward to replicating island sounds from the 1920s into a joyful 2013 context. Let’s work together to bring more sunshine!