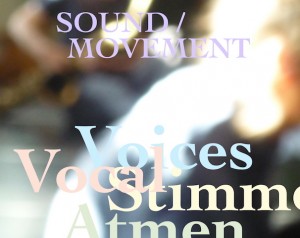 *The MAX series is conceived and organized by the MA Choreography (MAC) students of HZT Berlin. As a series, MAX presents choreography from various perspectives, formats, and contexts. Inspired by the GFT (Gesellschaft für Tanzforschung) symposium Sound-Traces-Moves in November 2016, this evening features the work of three performance artists/performance groups. Each performance presents a different approach to a performance practice at the intersection of voice/breath and movement.

We can no longer hold off the progress of machines, but we can attempt to reach a new strange subjectification with them. Live Labour is a search to interrupt our normalized relationship with digital devices, and summon us into a different affection. Moving from overzealous somatic practices to useless fetishist union, Live Labour delves into a deep computer dream, where electronic devices and human are taken to a paradoxical state of being.

Alejandro Karasik developed his work as a dancer, improviser, performer, choreographer, teacher, producer and editor in Buenos Aires. For six years he worked at the Research Institute in the Movement Department of Universidad Nacional de las Artes – UNA. Currently he is studying at the HZT Berlin: Master of Arts Solo/ Dance/ Authorship (SODA). He has a Choreographic Composition bachelor degree. He started studies in the FELDENKRAIS® Professional Training Program in Brazil. His interest in somatic practices is vast and intermingles with his stage research.

Katherine (Kai) Evans, Yuko Matsuyama and Ingo Reulecke are interested in the interface of pre-language phenomena and movement. In the improvisation practice they have developed together, voice and sound equally activate movement, and vice versa.
The three performers enter into an intense dialogue with each other, both on the level of dance and pre‐language, at the same time giving each performer space for her own approach to the work. These group actions and individual explorations are tightly connected with the space.
Link | Ingo Reulecke : www.ingoreulecke.com,
Yuko Matsuyama :  yuhki.de

The physicality of experience has been a long-term interests of mine. Related to this interest, I have, with various collaborators, experimented with amplified sounds (along with video image) as a way to provide the spectator with broader spectrum of ways to relate to the effort of the performing body. This work, however, has started to transform as the use of amplified (breathing) sound became a performative, improvisational possibility in its own right.
Link  : http://massescape.net/akseli_en.html